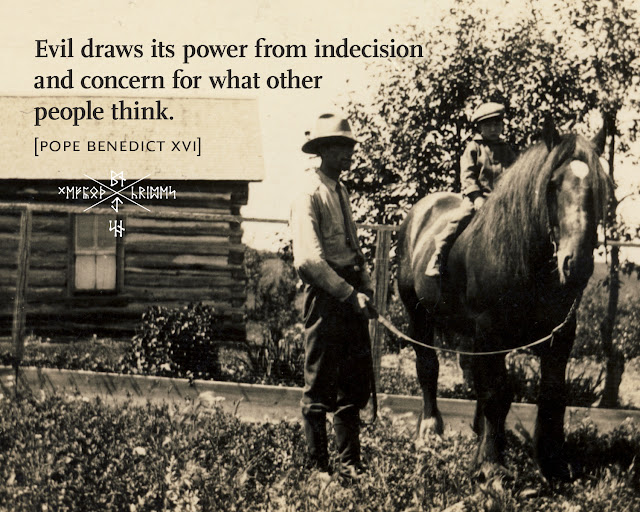 In life it’s sometimes difficult to keep one’s mind on Godly things rather than worldly things. One way we do that is by being overly concerned with what others think. So too, what can flow from this concern is indecision as to what to actually do. Pope Benedict XVI speaks about this in the quote above and says evil draws power from such things. I think this is true.
How many people do the wrong thing because they’re worried of critics and haters? How many do nothing because they are afraid of what others think?
I’ve been wondering, for example, about the Leader of Her Majesty’s Loyal Opposition Mr. Andrew Scheer. Politics these days is apparently all about what other people think, not actual policies and principles — we elected a Prime Minister who is an unfaithful Catholic (but doesn't seem to know it), who sexually assaulted a reported, and who thinks black face is just fine (until he decided it isn’t. Mr. Scheer visited my parish, St. John the Evangelist, in Calgary during the recent election (and I had the opportunity to say Mass with his Father serving as Deacon when I was last in Ottawa). Mr. Scheer wasn’t invited specifically but he is a faithful Church going Catholic and so, when he travels, he goes to Mass. It was a pleasant surprise to see him and he ducked out rather quickly as to avoid causing a frenzy of handshakes and photos; he came to worship God not to campaign.
Now I am not intending to drift into partisan politics here — I am glad to minister to a variety of people who vote a variety of ways — it’s how democracy works. However, I have been following things since our Prime Minister Justin Trudeau won another election (a minority Parliament) and the fact is that I’m rather disturbed at what I’m reading.
Some in the Conservative Party are expressing their view that Scheer must be dumped because he’s “unelectable”. Why? because he holds to Catholic teaching on a variety of social issues such as same gender marriage, abortion, euthanasia etc. The criticism is that he’s simply not with it and since the bulk of Canadians have moved on from these contentious social issues, he’s simply unelectable. Here’s the problem: Mr. Scheer is interested in governing the nation, not forcing everyone to believe the Catholic faith.
Disappointingly to many, Mr. Scheer has stated he will not rock the boat in relation to controversial social questions and will leave things as they are... much like Prime Minister Harper before him: baby killing and the murder of old and sick people to proceed as usual. Boiled down though, what this means, is that Mr. Scheer is potentially to be ousted from his position, not so much as how he performed, he won the popular vote, but because his beliefs conform to his Catholic faith. Put more plainly: if Andrew Scheer is ousted it will be because of his private religious beliefs which all Catholics are required to assent to.
Is this the kind of Canada we want to live in? One where no believing Catholic can realistically become Prime Minister?
Tudeau has already made it impossible for a believing Catholic to be an elected Liberal by insisting that one must hold the belief that to murder one’s own baby in the womb is a woman’s right. The Conservative Party would effectively be doing the same by insisting one cannot be a leader of the party unless they agree with the Liberals on this and many other social points.
People of any faith should find this appalling. Catholics especially should be deeply offended.
Not everyone liked Andrew Scheer — fine — democracy is about choice, but what I noticed is that the media spent an extraordinary amount of time talking about Scheer’s personal religious beliefs and his refusal to betray the Catholic faith though he was clear (over and over and over again) that he would not seek to re-address these controversial social questions.
So much of what the Catholic faith teaches is out of step with contemporary society — left and right. Because of this reality, and because of what others might say and think, are Catholics scared of being more open and outspoken in relation to the social issues? Are they inclined to be silent because they are simply too concerned about the opinions of other people? How does this development in the public life of our country (which has been shaped by the Catholic faith) increase fear and timidity amongst the faithful?

It’s worth thinking about.


The photograph: From the Bengry collection. Copyright 2019. All Rights Reserved.